After the Markets in Financial Instruments Directive II (“MiFID II”) and Packaged Retail Investment and Insurance Products (“PRIIPs”), the fund management sector will be turning its attention to the Alternative Investment Fund Manager Directive (“AIFMD”) in 2018. On 12 March 2018, the European Commission published a draft directive amending each of the AIFMD and Undertakings for Collective Investment in Transferable Securities (“UCITS”) Directive (“theProposed Directive”).

The Proposed Directive’s amendments deal with the concept of ‘pre-marketing’ in relation to the AIFMD and UCITS. At present, the AIFMD does not contain a definition of “marketing” and there is no harmonised approach in the EU. This means local regulators have taken different approaches as to what ‘pre-marketing’ activity is permitted before a formal regulatory notification is needed under the AIFMD. For example, discussing fund strategy with potential investors before the fund is established may be allowed in certain EU states, but require regulatory notifications in other. The proposed amendments to the AIFMD are intended to solve this through a new definition of pre-marketing.

These regulatory changes could have a major impact on firms in the private equity and alternative investment space, though it must be noted that the Proposed Directive is unlikely to be adopted by EU Member States until 2021, and its adoption in the UK is dependent on when Brexit is expected to take effect.

The key areas of focus for the Proposed Directive in relation to pre-marketing are set out in the below attachment. 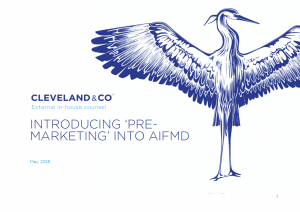