Celebrating Neurodiversity in the workplace 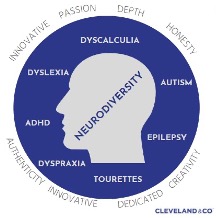 Neurodiversity describes a community of people who are neurodivergent, specifically used within the context of autism spectrum disorder (“ASD”) and extends to other neurodivergent conditions such as: Attention Deficit/Hyperactivity Disorder (“ADHD”), Dyspraxia (Developmental Coordination Disorder (“DCD”)) and Dyslexia and Dyscalculia. These neurological differences impact on the individuals’ process of information and neurocognitive functioning (Bewley and George, 2016). Essentially, neurodiversity refers to the idea that people have different experiences and have different ways of thinking and interacting, advocating that there is no “right” way of thinking, behaving, or learning.

Example: ASD describes that there are different ways of communicating, learning, and behaving. Individuals with ASD have differing abilities, strengths, and face various challenges in their day-to-day lives. Some individuals with ASD may be able to live independently, communicate verbally and have a normal or above average IQ. However, some individuals may be co-dependent. For example, affected individuals may be unable to communicate verbally and may struggle with their behaviour which can be harmful and could have an impact on their safety and well-being. Further to this, the suffering experienced by individuals may not be just physical but instead exist as a suffering that derives from being socially disadvantaged as a result of societal norms, leading to social inequality and the feeling of being excluded.

COMMON BARRIERS IN THE LEGAL SECTOR

Barriers in the legal profession make it challenging for individuals with neurodivergent conditions to enter it:

However, these are not the only barriers. Pursuing a career in law is competitive and the societal and psychological barriers often cause individuals to step out before they have stepped in.

However, it has been found that neurodivergent individuals possess many of the skills valued in the legal sector. Neurodivergent individuals are unique in the way they think and have skills such as lateral and strategic thinking, trouble-shooting and creative problem solving. For example, individuals with dyspraxia are very creative and show high levels of emotional intelligence. Individuals with autism can think critically and concentrate for prolonged periods of time, with the ability to produce detailed work.

It has been evidenced that a career in the legal profession is possible, which is largely epitomised by the work of David Boies and HHJ Dhir (A leading dyslexic US trial lawyer). HHJ Dhir describes how “Judges now come in all shapes and sizes. I would say in many ways, the Bar and judiciary are ideal professions for dyslexics and individuals with other special needs, because as judges we have experience of difficulty”.

With consideration of this, The Law Society recently estimated that 10 percent of the population are regarded as neurodivergent. Further findings by the Chartered Institute of Personnel and Development revealed that one in ten professionals were considered neurodivergent in their management practices. Therefore, it is not the disabilities that neurodiverse individuals experience that are barriers to entry, but it is the societal barriers that they experience every day.

Set out below are the main types of neurodiversity and how they can benefit employers (The Equality Act 2010):

Employers sometimes find it difficult to establish what reasonable adjustments (“RAs“) to implement for a neurodivergent employee. The appropriate RAs can vary between individuals with different neurodivergent conditions, so it is always useful to have a discussion to find out what works best for both the employee and employer.

Common RAs a workplace can implement vary from:

The Project currently has a podcast, providing free resources for support but also aims to raise awareness about neurodiversity across social media platforms including Instagram and LinkedIn.

Noun: diversity or variation of cognitive functioning in people.

Adjective: diversity and variation of cognitive functioning in people.

Adjective: described people who have a neurodivergence.

Please click here to follow Cleveland & Co on LinkedIn where you can find out what else we are doing for diversity & inclusion, as well as accessing our articles on the latest industry topics!