There has been a 65% jump in the number of firms referred to the Regulatory Decision Committee, suggesting an acceleration in FCA investigations.

Information provided to us by the FCA shows there were 476 firms in 2017 that were referred to the Regulatory Decisions Committee (RDC) in 2017*, a significant rise from the 289 in 2016.

The RDC makes certain decisions on behalf of the FCA relating to enforcement and supervisory actions for firms, as well as firm authorisations. The RDC is the final stage of decision making for the FCA, and decides on warning notices including those for financial penalties, suspensions, and public censures.

The jump in firms being referred to the RDC could be linked to the FCA’s renewed clampdown on misconduct by firms and individuals. 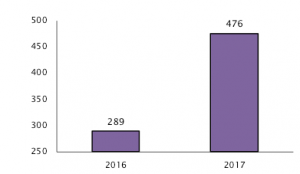 Our Managing Director, Emma Cleveland, has been featured in the Financial Times here with her views on the increase of firms referred.