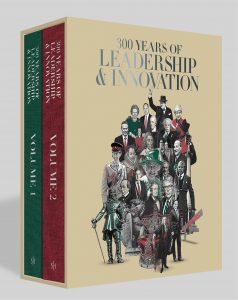 Cleveland & Co are delighted to be featured in the chapter dedicated to Women in Leadership of the official History of Parliament Trust publication entitled ‘300 Years of Leadership and Innovation’, which celebrates socially conscious and ethical leaders and Her Majesty The Queen’s life’s work as one of our greatest female leaders.

As a specialist law firm that covers the investment management sector, we are leading the way on the changes we want to see in the industry. Our innovative business model and hiring practices, as well as our agile-ready infrastructure have facilitated the firm’s growth, leading to us serving a broad range of global clients with combined assets under management in excess of £8 trillion. A pacesetting approach to innovation and leadership which is recognised in ‘300 Years of Leadership and Innovation’.

The History of Parliament Trust – one of the most respected and authoritative research projects in British history – is delighted to be launching a new publication entitled 300 Years of Leadership and Innovation at Westminster Abbey on Wednesday, 22 September 2021.

Produced in partnership with leading publisher St James’s House and written by an editorial team of distinguished academics and award-winning authors, this beautifully designed, fully illustrated, 600+ page hardback publication is being launched to coincide with the 300th anniversary of the appointment of Britain’s first prime minister, Robert Walpole, in 1721, and in the year of Her Majesty The Queen’s 95th birthday.

Celebrating the best of British leadership, 300 Years of Leadership and Innovation features expertly written articles on those who have shaped British society, past and present; from Walpole to Cromwell, Churchill to Blair, The Queen and Prince Charles to captains of industry.

“We are absolutely thrilled to have been selected as one of the companies to be featured in the official History of Parliament Trust commemorative album celebrating 300 years of Leadership and Innovation.” Emma Cleveland, CEO of Cleveland & Co says.  “As a firm, we are incredibly proud of our progressive and forward-thinking approach and it’s such an honour to see that celebrated alongside other prominent women leaders.”